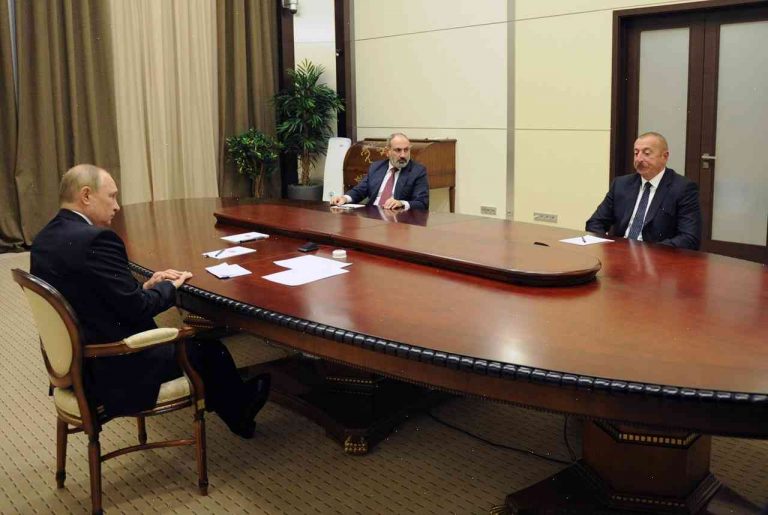 Armenia and Azerbaijan accuse each other of violating ceasefire, including shelling civilians

A ceasefire between ethnic Armenian and Azeri forces in Nagorno-Karabakh is due to expire on Monday.

A ceasefire agreed in 1994 has largely held but has not been properly observed. Tensions have spiked this month when in disputed Nagorno-Karabakh and along the border with Azerbaijan, ethnic Armenian forces hit Azerbaijani positions – with violence escalating.

Pictures have emerged of civilians hit by mines. The Armenian president has said that 127 civilians were killed in the Azeri artillery attacks. Azerbaijan says that it killed eight civilians in Armenia.

The conflict stems from a 1991 breakaway of one of the largest ethnic Azerbaijani regions.

Sargsyan and his Azerbaijani counterpart, Ilham Aliyev, have reportedly said they would like to meet as soon as possible, although details have not been released. They are being accompanied by ministers from the European Union, Russia and China.

The meeting comes a day after Azerbaijan accused Armenia of violating the ceasefire on an extension road between Azerbaijan and Armenia.

Up to 90 rockets were fired, with non-deployed officers wounded, said the Azeri Defense Ministry. Armenia, meanwhile, says that a border guard was killed.

The forum is being held ahead of the April 20 deadline to agree on the security of the disputed territory.

The so-called CSTO, a Russian-led security group, has effectively agreed to the security of Nagorno-Karabakh by refusing to provide an escort for the northern part.

Sources in Moscow told CNN that talks between Russia and Armenia could also discuss additional arms for Nagorno-Karabakh.

Earlier, Russia and Armenia told the separatists: “We are ready for dialogue at any time and anywhere.”

However, a spokeswoman for Azerbaijan’s Defense Ministry said: “The situation is of extreme volatility, and we are convinced that the two countries are exerting influence over the military.

“In particular, Russian actions are creating the dangerous precedent of changing the status quo in the South Caucasus through the use of military force.”

Speaking on the steps of the Russian Foreign Ministry, Turkish Foreign Minister Mevlut Cavusoglu also called for a truce, saying both sides were behaving worse than ever.

On Friday, Turkish authorities said they had destroyed more than 500 mines around the border with Armenia.

From a successful partnership with 311, new NYC policies could bring transparency to lost documents