At first glance, Amanda Vitiello has everything you’d want from a good chef. She’s got a résumé that includes stints at Côte Basque and Bouley; a fanatical diet (or as she’s described it, an… 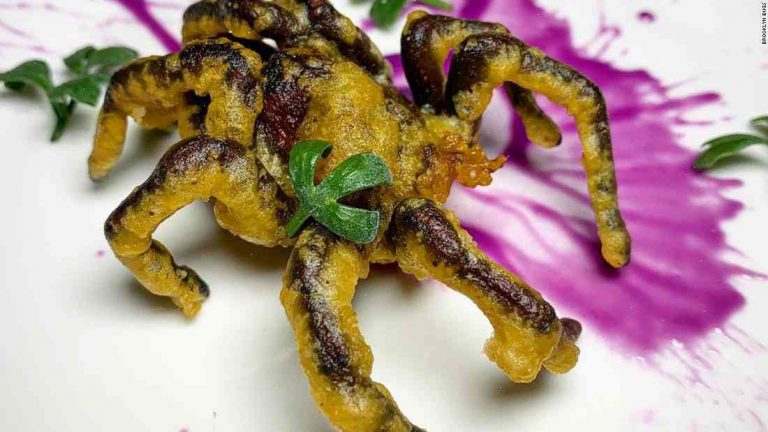 At first glance, Amanda Vitiello has everything you’d want from a good chef.

She’s got a résumé that includes stints at Côte Basque and Bouley; a fanatical diet (or as she’s described it, an obsessive health regimen that prevents her from eating most meats); and a nearly obsessive attention to detail. And she has a spotless restaurant she’s hoping to start: Town Hall. The venue, opening May 1, is an ambitious venue built to live up to its name.

Tucked into the corner of the former Tagliolini, where on most nights the menus will be seasonal, the 29-seat space will be brightened with wood panels, glass-enclosed counters and circular tables. And in an attempt to reverse a phenomenon that has ripped the number of dining choices in town to shreds, Town Hall is turning to insect consumption.

No, we’re not talking about crickets or grasshoppers or fresh mealworms. It’s a mean pizza, one that Vitiello, the chef, is poised to prove could be a global phenomenon.

St. Louis and London are serving samples of the pesto-topped pizza, the product of its origins in the far East, a tradition that ties the American version to the region’s meat-based fare. According to chef and co-owner Dale Tobias, the pizzas are a taste test for the Washington market. They’re available in a small portion of the space for the early going; no decision will be made until the restaurant gets a handle on its crowds.

You’ll also have to overcome a sense of curiosity about a meal that — still in the concept phase — involves introducing a few thousand bugs to a crowd (we grabbed one at a test event earlier this month). In theory, the mix of cured meats, cooked veggies and charcuterie that sit atop the thick, charred crust could make Town Hall an appealing vegetarian spot, although making the dish sustainable over time is just as important. But in life, as in love, we tend to be drawn toward the startling and perhaps the eerie.

Vitiello was joined at a recent demonstration of the pizza in a corner of Town Hall by Tobias, a veteran of the Le Diplomate and Galileo concepts. Talk about a first impression. Her pizza was not immediately obvious — some tried it unsuccessfully, saying it tasted like broccoli, and others called it “salad-like” — but still overall it was impressive. The chef managed to bring a note of crisp to a dough that’s by nature flabbier and more chewier than, say, anything you’d see on your breadline in Milan or Paris.

On the table, which had been prepared with a cheerful notion of rapid service (the dish would fit in well with the closing of tagliolini, which is on to bigger things), was a platter of green onion and tomato slices, a small salad of shredded carrots and broccoli rabe, and a chipotle-garlic dip, in case of any curiosity.

Those were the elements that had us at hello. They paired well with the pizza’s crust. A crispy inner skin held together the soft textures of the meat — pork sausages, heart of palm, roast butternut squash, and even a little bit of swiss chard. A dusting of black pepper and hints of freshness, plus the intriguing basil sauce that’s something of a specialty at Zola and Graffiato, rounded out the experience.

“We want to do something that’s delicious, but [that] is also changing things,” Vitiello said, a swipe away from the words that essentially mean something in the building’s official opening announcement:

“Chef Amanda Vitiello, a New York native, is creating a place where she hopes to reshape diners’ perceptions and bring many of her other kitchen friends together.”